Colin Kaepernick's ink is getting lots of ink. The San Francisco 49ers' star sub's arms and back are covered with tattoos, not an unusual look among athletes. But when you play quarterback and replace a proven winner like Alex Smith for two victories as a starter, your arm gets lots of attention. 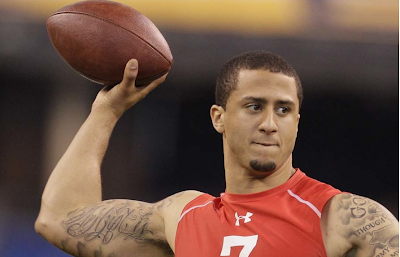 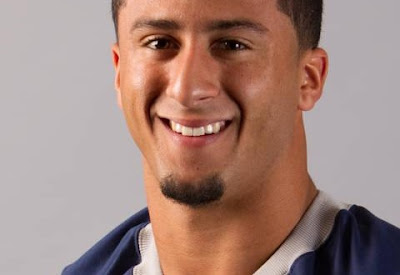 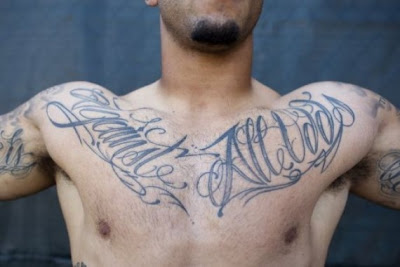 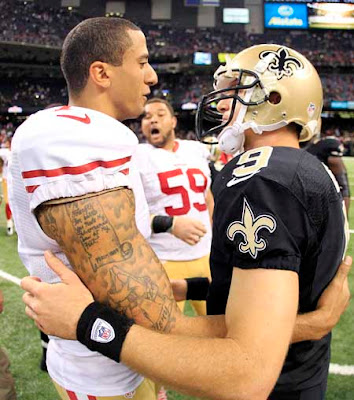 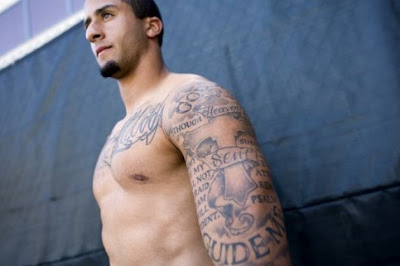 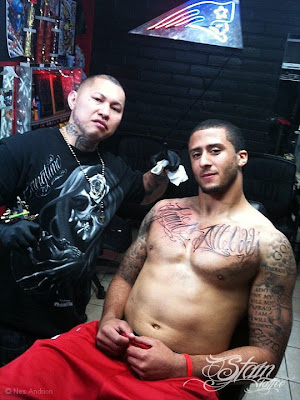 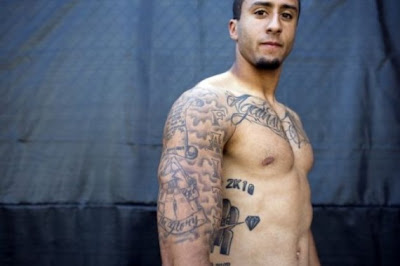 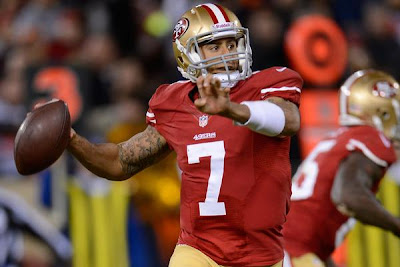 Both of Kaepernick's arms are tapestries of tattoos, displaying psalms and other phrases. The QB's tattoo artist, Nes Andrion of Reno, Nev., told The Huffington Post that the inside of one of Kaepernick's biceps reads, "My Gift," and the inside of the other reads, "Is My Curse." The top of his right bicep features the word "FAITH."

Andrion, the owner of tattoo shop Endless Ink in Reno, estimated he's done "93 percent" of the player's tattoos, over nine sessions in Reno and Las Vegas while Kaepernick was playing for the University of Nevada. He said Kaepernick liked the depiction of opposing forces, such as good and bad and Heaven and Hell. Thus, the tattoos on Kaepernick's back -- more a skin mural, really -- have an angels and demons motif, according to the artist.

"When I put my touch to that tattoo, it's not just a tattoo cause I'm getting paid for it," Andrion said. "It's got meaning."

The psalms tattooed on Kaepernick's arms address his competitive instinct, according to Sports Illustrated. Psalm 27:3, on one arm, reads: "Though an army besiege me, my heart will not fear though war break out against me, even then I will be confident."

Psalm 18:39, on the other arm, says:, "You armed me with strength for battle; you humbled my adversaries before me."

Kaepernick asked his parents for help picking the passages to inscribe on his arms, according to the Nevada Sagebrush. “They are about asking God to help kick somebody’s butt,” his mother, Teresa Kaepernick, told the student-run university outlet. “When you look at them, it’s not surprising to see that an athlete chose those two verses.”

Butt-kicking indeed. In a season that has included two starts, Kaepernick has completed 48 of 74 passes for 680 yards and three touchdowns, showing lively legs and a greater willingness than Smith to throw downfield. His success has generated a genuine quarterback controversy in San Francisco, putting pressure on Coach Jim Harbaugh to name a starter for the coming week.

Quarterbacks aren't normally known or their tats, but Kaepernick seems comfortable in his skin. And whether he starts or not, the 2011 second-round draft pick already has his fill-in success summed up in a tattoo on his chest. The handwriting reads: "Against All Odds."

"I had so many people saying I wasn't going to be successful," Kaepernick told Sports Illustrated. "For me, it's trying to prove those people wrong. They won't tell me whether I'm going to be successful; I'll determine it by how hard I work."
SOurce : http://www.huffingtonpost.com/2012/11/27/colin-kaepernick-tattoo_n_2193761.html
Posted by Unknown at 5:39 PM